Lift The Ban: Why people seeking asylum should have the right to work.

Home › Past News › Lift The Ban 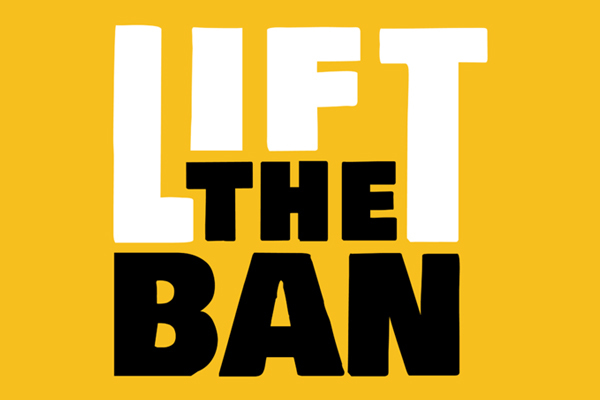 Lift The Ban: Why people seeking asylum should have the right to work.

Lift the Ban is a coalition of organisations from across the UK who have come together to call on the Government to give people seeking asylum the right to work. The coalition includes diverse voices from local to national, across the migration sector and encompassing unions, think tanks, faith groups and business.

New figures released today suggest that the UK economy could gain £42.4 million1 in additional tax revenues and savings if the Government were to lift the ban on letting people seeking asylum work.

Currently people seeking asylum are banned from working while their claims are being processed. The Home Office aims to deliver decisions within six months, but almost half (48%)2 have been waiting over six months, with many people even waiting years.

People seeking asylum can only apply for permission to work if they have been waiting for a decision for over 12 months, and even then, only for jobs that are on the Government’s Shortage Occupation List – a severely restrictive list that includes jobs such as classical ballet dancer, nuclear medicine practitioner and geoenvironmental specialist.

A report released today by the Lift the Ban coalition, a group of 65 organisations including charities, trade unions, think tanks, faith groups and businesses, reveals the full extent of both the moral and economic evidence for lifting the ban. If half of people seeking asylum earned a national average wage, £42.4 million would be recouped by the Government through tax and national insurance payments and savings on financial support.
As well as the economic benefit of allowing people seeking asylum to work, the public is in favour of lifting the ban with 71%3 agreeing that people seeking asylum should have the right to work.

A Lift the Ban coalition survey of 246 people with direct experience of the asylum process revealed 74% had secondary-level education or higher and over a third (37%) held an undergraduate or postgraduate university degree. Nearly two-thirds (65%) of respondents were working before they came to the UK, even though many of their countries of origin have been at war for years or have some of the world’s lowest employment rates.

The survey showed that 94% of people seeking asylum in the UK want to work. Instead they are left to live on just £5.39 a day to meet all their essential living costs, including food, clothing, toiletries and transport. Many struggle to support themselves and their families, and may even become destitute, while their talents go to waste.

Speaking on behalf of the Lift the Ban coalition, Stephen Hale from Refugee Action, said: “It’s madness that people fleeing the horrors of conflict and persecution are unable to work for long periods after they arrive in the UK. It is deeply damaging to those it affects, makes integration far harder, and is bad for the economy and public finances. Lifting the ban has strong public support.

“People seeking asylum tell us every day that they feel worthless and that being unable to use their skills over a long period of time forces them to be dependent. They want to give back to the country that has protected them. It’s time for change. We urge the Government to move rapidly to grant the right to work for people seeking asylum.”

TUC General Secretary Frances O’Grady said: “This ban is cruel and self-defeating. We shouldn’t be wasting the talent and skills of these workers.
“People seeking asylum must be given the right to work and contribute. These damaging restrictions are in no-one’s interest.”

Rebecca Baron, Social Mission Manager, Ben & Jerry’s, said: “With the right to work, people can start to rebuild their lives, provide for their families and be a more active part of their new community. To us supporting the right to work for people seeking asylum just makes sense. We’ve been fighting for fairness and justice throughout our 40-year history. That’s why we’re proud to stand in solidarity with more than 60 organisations asking the Government to ‘Lift the Ban’.”

The report includes testimonies of people in the asylum system, including Rose4, who has two young children, who has been waiting for a decision on her initial asylum claim for three years. She tries to ensure that her children lead a normal life but is often unable to offer them even the most basic of things. She said: “Not being able to work, it cripples you…As a parent, you feel that you are not good enough. When you have kids, their daily needs – there are things that you need to give them.